Disclaimer: We may receive a commission for products purchased through some links in this article.

Close your eyes, reach deep inside, and get in touch with your inner child.  Recall the wildly fun and frenzied enjoyment of chasing and hiding from your friends during a heated game of Nerf wars.

That’s step one of finding the best Nerf guns for your kids.

At the outset, we adults need to take the restraints off our inner child.  That’s the key for us parents: embrace the Nerf.

There is no denying that Nerf wars are super fun and healthy competition for kids of all ages, and even for adults.  Some of our kids are too young for that, but even our 3 and 4 year olds love to target practice with Nerf guns.

With that in mind, we reviewed the best Nerf guns for kids in a range of ages.

Which Nerf gun is best for your kids is really going to depend on the age and ability of your child.  Some Nerf guns are just easier to use than others, but again, that varies from one kid to another.

All-in-all, Nerf guns are not overly complicated toys, and we made it really easy to find quality Nerf guns for 3, 4, 5, or 6 year olds.  You can check out our Nerf guns comparison chart below for easy details, or see our full Nerf gun reviews below where we described all the pros and cons surrounding the Nerf guns we like.

Released three years ago, this Nerf N-Strike Hyper Fire Blaster gun shows no signs of slowing down in the popularity stakes. It is a full-auto flywheel blaster, featuring cool, sci-fi styling.

The Hyper Fire Blaster comes with a 25 dart drum, which enables you to fire as many as five darts every second straight from the box.  That’s right, there is a lot to love about this Nerf gun.

Not only can you fire a lot of darts but it has a quieter operation when compared with the vast majority of other flywheel blasters on the market today. Accuracy is also better than the rest as well. Plus, for an unmodified blaster, you certainly get an impressive fire rate.

One thing we certainly like about this Nerf gun is the sci-fi and futuristic styling it boasts. This definitely makes it different from the other Nerf guns in the Elite N-Strike range. It is also great for covering fire or suppression thanks to the blazingly fast and smooth rate of fire.

In terms of the weight of this Nerf gun, it is heavier than the Rapidstrike. It weighs approximately four lbs when completely laden, which is pretty good. It is also very easy to use. Changing the magazine or drum is easy too. All you need to do is start extending the middle finger of your hand you’re going to use to trigger the gun in order to press the release button. To pop out the drum, you can use your other hand.

Here is a great video on the Nerf N-Strike Hyper Fire Blaster: 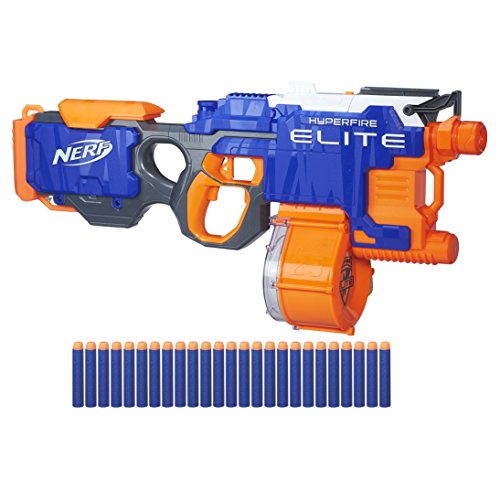 Next, we have the LongStrike, which is a Nerf blaster that was released in fall of 2018. It comes with instructions, as well as 18 elite darts, three six-dart clips, a bipod, a distance scope, and a barrel extension. It is exclusive to Amazon.

This Nerf gun is a re-release of the N-Strike Longstrike CS-6, which was released back in 2010. Upon use, it is easy to see the improvements that have been made. Rather than a reverse plunger, the newer version makes the most of a direct plunger system. There have also been updates to the internals, matching the performance of the blaster with other modern N-Strike Elite firing ranges. Another change is the inclusion of an unjamming button on the left side.

Aside from this, there are a number of other features that make this nerf gun a great choice. This includes three strap points, three tactical rails, and compatibility with barrel extensions. It also has an integrated shoulder stock whereby two additional clips can be stored.

If you take a look online, you will see that this Nerf gun has been very well received, and it is not difficult for us to see why this has been the case. The Nerf gun measures at three-feet long and you will be able to fire up to a distance of 35 feet, so you should have no trouble finding your target. You can also extend the barrel of this toy gun for long-range targeting.

Next, we have the Nerf Zombie Strike Sledgefire Blaster. This is ideal for blasting away those zombies using three darts at a time.

There are lots of great benefits associated with this particular Nerf gun, aside from the three Nerf dart blasting. This includes the unique shells and ammo storage.

This Nerf gun is also very easy to use. You simply insert the Nerf darts into each of the shells. You then ‘break’ the gun open with the button that will open the compartment for your ammo.

You can then insert one loaded Nerf shell into the chamber and then close. Aim at the zombie target you wish to eradicate and then squeeze the trigger and you will see that three darts blast away in a true shotgun style. You can repeat this until you need to reload the shells. Sounds like a lot of fun, right?

This Nerf gun has been designed for children who are eight-years-old and above. It is a great Nerf gun to own and represents excellent value for money.

If you are looking for a toy gun that is going to give you a low chance of missing, power, and uniqueness, you will struggle to find better than this one. It is certainly worth the price.

Another Nerf gun that we have been impressed with is the Nerf N-Strike Elite Firestrike Blaster. This is a neat little blaster, to say the least.

It comes with a number of great features, including light beam targeting with a beam that works on targets up to 15 feet away, single-shot blaster, front-loaded system, and three Nerf elite darts.

While this toy may be small in size, do not let this fool you. It can definitely pack a powerful punch. It launches elite darts up to 75 feet away.

If you want to add some accuracy to your Nerf gun blasting, this is definitely an option to consider thanks to the light beam. The light beam can highlight targets as far as 15 feet away, which makes it much easier for you to hit accurately. There will be no more excuses if you miss with this gun!

There are a lot of other reasons why we have featured this Nerf gun highly in our review. This includes the tactical rail, which enables the blaster to be customized to your heart’s content. There are a lot of great accessories available that can be used with this Nerf gun, and so it is definitely worth checking these out. 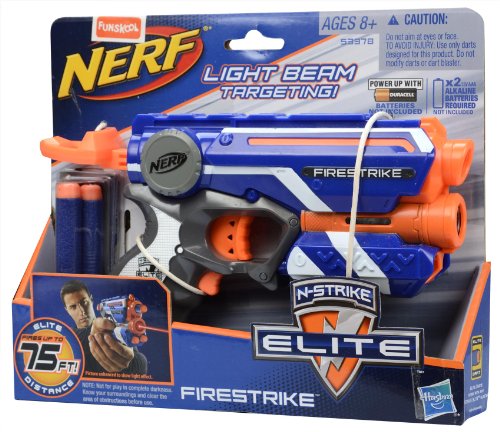 Last but by no means least, we have the Nerf N-Strike NanoFire. This was released in 2018 and it comes with three elite darts.

This Nerf gun is pretty much a reboot of the Dart Tag Stinger from 2013. However, there are some key differences, and one of the main differences is the permanent shell on the blaster. It also has two dart holders on top of the gun. The orange slider at the bottom of this toy primes the blaster.

The compact design of this Nerf gun means that it can be taken anywhere and used with ease. All you need to do is load a dart into the barrel to get started.

After this, the priming handle simply needs to be pulled down, and then you can pull the trigger in order to fire the Nerf gun. Simply reload the gun and fire it again. Not only do you get three elite darts but there is storage on the upper rail for two darts too.

All in all, this is a Nerf gun that provides a lot of fun. It is powerful and easy to conceal, making it perfect for surprise attacks especially. While this Nerf gun may look little, it does not let you down, as it shoots very far!